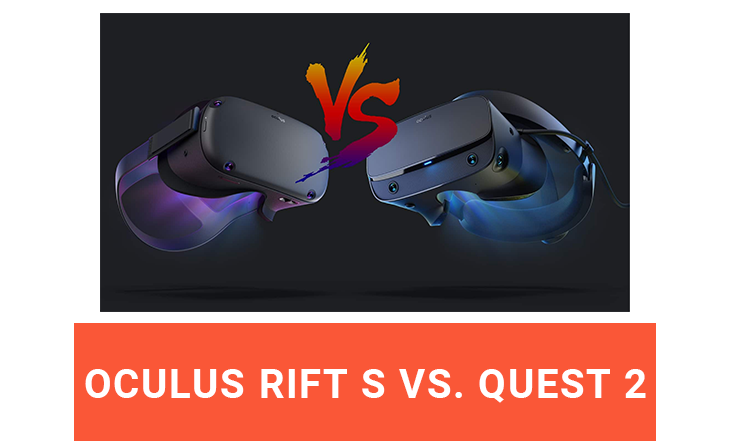 Video games have been the most reliable source of escape from worldly woes and also takes us to the world of fantasies, seamless boundaries, and utter joy. The industry of video games has revolutionized incredibly.

From bulky consoles and their wired controllers to computer games, portable gaming devices to consoles with sensors and wireless controllers, and smartphone gaming to VR headsets. Every new decade has brought something exciting and a better innovation than before.

There is no lie that VR headsets are highly tempting, and most gamers wish to try them at least once in their lives. Since VR headsets are a sizeable investment, not everyone can purchase them.

If budget is not your issue and you plan to choose a VR headset between the top-notch Oculus Rift S and Quest 2, here is our take on comparing these two; read it out carefully.

Furthermore Check out our other articles on VR Headset:

A brand of Facebook Technologies, Oculus, along with Lenovo Technologies as its co-developer, rolled out its amazing product back in early 2019, the Oculus Rift S. Let’s find out the impressive specs and features it has.

Available in black color, the very classic-looking VR headset is pretty easy to wear and can be adjusted according to your head size by the Velcro straps. It is pretty comfortable to wear as far as comfort is concerned but is comparatively heavier than its predecessor Oculus Rift. This headset has a halo headband that enhances stability and is adjustable for almost every head size for an ideal fit.

The Rift S is a PC-powered (tethered) VR headset that requires a powerful computer to work efficiently and provide you with the best immersive experience. The minimum PC requirements of this VR headset include,

With the LED display of Rift S, you would get brilliant visuals because of the excellent per-eye resolution of 1280 x 1440p. Enjoy smooth games without any motion blur with the 80Hz refresh rate; however, the headset would utilize the specs of your PC for processing.

Your body and head movements are tracked with great accuracy, thanks to the 6 Degrees of Freedom (DOF). Your detected motion translated to virtual reality for high precision. Note that you don’t require any external sensors for motion tracking.

The two controllers of Rift S have an analog stick, two triggers, a menu button, and two face buttons. The buttons and analog stick are used for gaming controls whereas, the triggers help virtual gripping and pointing.

This VR headset is integrated with 3-Dimensional positional audio that provides you with crisp sound with impressive details. With this technology, your experience is enhanced to the next level. There is a 3.5mm audio port that allows you to connect your headphones as well.

You can explore a wide variety of virtual reality games from the Oculus Rift Store to be played on your PC.

You can easily find the Oculus Rift S in the market as well as online on the Amazon store, where it is priced at $299.

The Oculus Quest 2 is the finest creation by the company and probably the best VR headset out there for amateurs and professionals. Step inside the immersive gaming world with the Quest 2 and enjoy every bit of it with the top-tier specs and features.

Have you ever done Scuba diving? Because the Quest 2 headset is worn somewhat like the way, you wear a Scuba diving mask. The white-colored VR headset looks quite attractive and has soft straps that provide you with the optimum comfort.

The straps are adjustable and designed to fit heads of every size so that everyone can enjoy the VR experience. If you wish to upgrade your headset for better stability and comfort, you can use Oculus accessories that are sold separately.

This is not a PC-powered headset; in fact, it is a standalone device that can be tethered to a PC as well if you want. A USB Type-C cable priced at $79 must make it a wired headset like the Rift S.

The Fast-Switch LCD has a per-eye resolution of 1832 x 1920p that is responsible for great visuals. Also, the 90Hz refresh rate offers smoother visuals.

The Oculus Quest 2 is also integrated with 6 Degrees of Freedom (DOF) and offers the same motion tracking as the Rift S.You don’t require an external sensor for this VR headset.

The sound technology of Quest 2 and Rift S are the same, i.e., 3-Dimensional positional audio that is built-in the headset for an excellent surround sound experience. This VR headset also has a 3.5 mm audio port on which you can attach your external headset.

The Oculus Quest Store allows you to discover new challenging and adventurous games and shows available in the library.

Considering the specs mentioned above and features, we have concluded that both the VR headsets are unique, excellent in performance, and comfortable to use. However, the Oculus Quest 2 is considered a better option between the two because of its blazing-fast processor, better resolution, and improved controllers.