How Do VR Headsets Work?

VR or virtual reality is a system that has the feature that uses computer technology to create an outstanding experience. Different from past VR Headset put the user inside the place. This VR headset affects all the senses and takes the person away from its surrounding. Therefore, this VR Headset creates a strain and burden on the eyes of users.

Effect Of VR Headset On Eyes:

VR headsets are now in access of every person either he wants to learn new things with insight knowledge or play video games with amazing graphics and animation. But the question is does a VR headset affect the eyes. Everything present in the universe has two possibilities: it may have positive and adverse effects; this depends on its usage.

How VR Headset Cause Eye Strain?

VR headsets have two LCD monitors that are present in front of every eye. These monitors are used to create an illusion and take the user into the depth of every scenario. Unfortunately, this extra-large focus for an extended period causes eye strain. This strain is present at every point where you try to focus more.

VR headsets have more focus on video games; as kids love video games, they are in most danger if they use them more. In today’s world, every third child under eighteen is a gamer, which is not safe for the future generation. In addition, too much use of VR headsets may cause myopia, nearsightedness, and digital strain on the eyes.

Games are the source of fun not only for kids but more common in adults. This love for games is your hate for eyes. An adult who spends 10 to 12 hours playing the game may suffer from nausea and may lose his orientation. In addition, due to extra focus during games In VR Headset adult may lose steady movements of eyes.

How VR Headset Benefits For Eyes?

Everything comes with two possibilities; if it does some harm, it will be beneficial in some other way. The same is the case in VR headsets. For example, it may affect eyesight and cause eye strain. But if you follow the screen time allowed to you, it may also increase your vision power.

As VR Headset allows you to see and everything in deep, it may increase the sharpness of your eyes. During games, you have to adjust the binocular vision for virtual reality; this positively affects the eyes.

How To Avoid Eye Strain?

VR headset affects eyes may cause disturbance in focus in real life and dryness of eyes. The following steps can reduce the severity of eye strain while using a VR headset:

Does VR Headset affect eyes? Can its answer be yes or no depending on its use? If you use the headset with proper care, you will not have to worry about your eye’s health. But ling more than usual can cause damage. 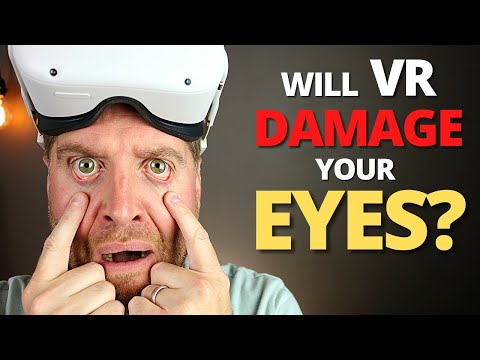